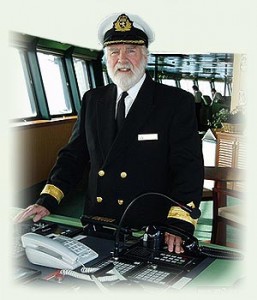 Captain Warwick commenced his sea-going career at the age of 15 as a cadet at the pre-sea training ship HMS Conway in North Wales. He became an indentured apprentice two years later on the cargo ships of the Port Line whose principal area of trade was Australia and New Zealand. After obtaining his Second Mate’s Certificate in 1961, Captain Warwick spent the next several years sailing with various companies to gain experience on different types of ships. It was during this time he served as Fourth Officer on the Royal Mail cruise liner RMS Andes and this experience left him with the desire to eventually specialize in passenger shipping.

In 1967 he became Chief Officer of a cargo ship, and by 1968 he had obtained his Master’s Ticket. A few years later, in 1970, he joined the Cunard Line and was appointed to the Carmania as a junior officer. Since then he has served in various ranks on the QE2, Cunard Adventurer, Cunard Countess, Cunard Princess and Crown Dynasty. His first command was of the Cunard Princess when she was sailing in Alaskan waters in 1986.

He was Navigator on the first world cruise of the QE2 in 1975 and Chief Officer for a number of years, which included the period when the liner was requisitioned by the British Government for service in the Falkland Campaign.

Captain Warwick was first appointed to the command of the Queen Elizabeth 2 in July 1990, and was Master during the visit of Her Majesty Queen Elizabeth II and His Royal Highness the Duke of Edinburgh, on the occasion of Cunard Line’s 150th anniversary celebrations at Spithead. At this point in his career he made Cunard Line history by sailing in command of the same ship as his father, the late Commodore William E Warwick CBE RD RNR who was the first Master of the QE2 before he retired from active service in 1972.

In June 1996, Captain Warwick was appointed to the position of Marine Superintendent of the Cunard Line fleet and then to the permanent command of the Queen Elizabeth 2 on 1st October 1997.

One of Captain Warwick’s most memorable events was solemnizing his daughter’s marriage on board the QE2 in Boston harbour on 4 October 2001. The ceremony was conducted in accordance with a special license issued by the Governor of the State of Massachusetts and thus became the first legal marriage in living memory carried out by a Cunard Master on board any of the company’s ships.

During his association with the QE2 he originated the first authoritative book about the liner which was published by W W Norton (New York & London) in 1985. The work was revised and updated by Captain Warwick in 1994 and again in 1999.

In 2002, Captain Warwick was elected President of the annual Merchant Navy Memorial Service which is held every September at the Tower Hill memorial in London to honour all those merchant seafarers that lost their lives in times of conflict.

On July 4, 2002, at the keel laying of Queen Mary 2, he was appointed Master Designate of the new ship. At the same time he had the honour of giving the first order to commence the assembly of Queen Mary 2 which upon completion became the largest passenger ship in the world. Following the arrival of the new Cunard flagship in Southampton on December 26, 2003 Captain Warwick was given a new title – that of Commodore of the Cunard Line.

Captain Warwick is a Younger Brother of Trinity House, a member of the Honourable Company of Master Mariners, a founder member and Fellow of the Nautical Institute, Governor of the Marine Society and a retired officer of the British Royal Naval Reserve.

Commodore Warwick retired in 2006 after 36 years of service with Cunard Line. He has a son and a daughter and lives with his wife, Kim, in Somerset, England. His interests include property restoration, maritime history, genealogy and researching the history of Cunard Line captains since the company was founded in 1839. His interest in the Titanic lead to a visit in August 2001 by deep-sea submersible to the wreck which lies at a depth of two and a half miles below the surface of the North Atlantic Ocean.
__________________________________ 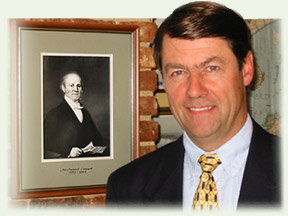 John G. Langley is a native of Halifax, Nova Scotia, Canada where Samuel Cunard, founder of the Cunard Line was born on November 21, 1787. After a successful career in law, Mr. Langley retired from active practice, and, with a background of some 30 years as an avid collector and student of Cunard history, established the Cunard Steamship Society in 1998. Since then, Mr. Langley has devoted much of his time to research and writing on the subject of Cunard history.

He has spoken extensively on the story of Samuel Cunard and the Cunard Line, and has been instrumental in establishing temporary exhibits of ephemera from his large private collection of Cunard artifacts in Maritime Museums throughout Eastern Canada. He has been consultant to producers of films and documentaries on the life of Samuel Cunard and vessels of the Cunard Line. He is the award-winning author of ‘Steam Lion – a biography of Samuel Cunard’ and lectures extensively aboard Cunard liners and other cruise ships.