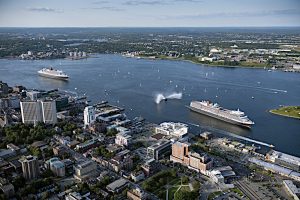 July 26, 2019 was a special day in Halifax, the ancestral home of Cunard Line. Here, for the first time two Cunard Queens – the flagship Queen Mary 2 and the Queen Elizabeth – met and berthed end to end at Pier 21. The historic occasion was commemorated by a special ‘sail away’ during which, led by harbour mascot Theodore Tugboat, first Queen Elizabeth, followed by Queen Mary 2 performed a 90 minute circle around the harbour accompanied by an Irving tug which added to the spectacle with her water cannon.

Cunard Line flagship Queen Mary 2 following Queen Elizabeth out of Halifax harbour in an historic meeting of the two Queens in Halifax, July 26, 2019.