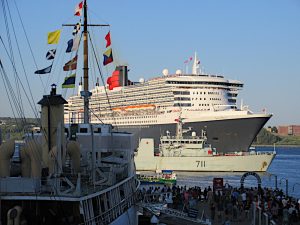 Queen Mary 2 escorted by Canadian naval vessel (with CSS Acadia in foreground) performing salute to Canada’s 150th birthday off the end of the Maritime Museum of the Atlantic wharves.

In 1867 confederation marked the birth of Canada as a nation. In recognition of this occasion the Queen Mary 2, flagship of Cunard line performed a special sailaway from Halifax harbour August 10, 2017. On a beautiful late afternoon passengers lined the rails of the ship while thousands gathered on the waterfront to watch QM2 perform a nautical salute to Canada when she slowly made her way up the harbour, turned and dipped her flag opposite the Maritime Museum of the Atlantic, not far from the former Cunard wharves and home port to RMS Britannia, Cunard’s first transatlantic liner.