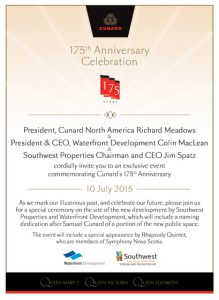 The QM2 completed the transatlantic portion of her Commemorative crossing upon arrival in Halifax, Cunard’s ‘Ancestral home’ on July 10th. A full day of carefully planned historic events ensued both aboard ship and ashore. It was a memorable day from early morning arrival in the sunshine until evening sunset and a grand departure from Halifax harbor with naval escort, shire based brass bands and crowds of onlookers. During the day three major events took place, all of which served to focus attention and commemorate the rich history of Cunard line and its deep roots in Nova Scotia.

The first of these was a large gathering ashore to dedicate a section of the Halifax waterfront to the memory of Samuel Cunard, the ‘Steam Lion’ and founder of Cunard Line. Henceforth, a prominent section of the waterfront near the cruise terminal shall be known as ‘Cunard Quay’ and soon to become part of a large public-private development initiative around this site. 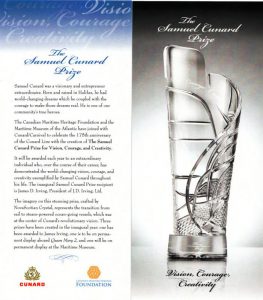 At noon an invitation only reception and luncheon was held aboard QM2 – the First Annual Samuel Cunard Prize event to honour a recipient who best exemplifies the entrepreneurial genius of Samuel Cunard. The first recipient of the prize for ‘vision, courage & creativity’, a beautiful piece of crystal crafted by Nova Scotian Crystal – was James Irving, President of Irving Shipyards.

Later in the afternoon Captain Oprey, accompanied by Cunard executives attended the Old Burying Ground to lay a wreath on the gravesite of Susan Cunard, widow of Sir Samuel. This was followed by the opening of a new exhibit honouring Samuel Cunard at the Maritime Museum of the Altantic officially opened by N.S. Tourism Minister Tony Ince, N.A. President of Cunard Line Richard Meadows and the author. 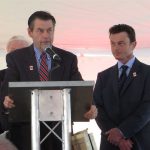 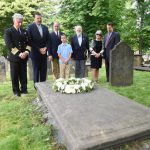 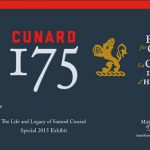 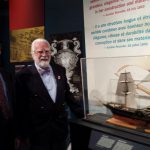 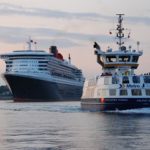 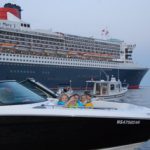 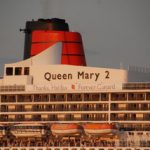 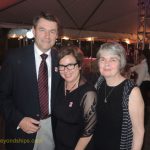 Society Chairman and his wife Judith enjoying the company of Jackie Chase, Director of Public relations for Cunard North America at the New York 175th finale. (with thanks to Richard Wagner)