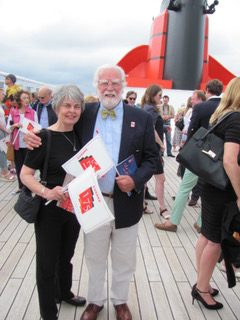 Judith reunites with Commodore Ron Warwick aboard QM2 in Southampton at the commencement of Cunard’s 175th Anniversary commemorative crossing of the Atlantic July 2, 2015

Accompanied by my wife, Judith, we had the singular honour to be amongst those other special guests and passengers aboard QM2 on this historic crossing intended to replicate the inaugural crossing of Cunard’s first flagship, RMS Britannia from Liverpool to Halifax and Boston in July 1840. It was most fitting that in collaboration with the artist Robert Lloyd his rendition of Britannia Maiden Voyage was carried aboard, formally unveiled and displayed in the Grand Lobby of QM2 during this commemorative crossing. It was a most extraordinary voyage, steeped in history and highlighted by special 175th Anniversary events in the five homeports of call…starting in Southampton, and followed by Liverpool, Halifax, Boston and New York. From commencement of the voyage in Southampton July 2nd until the conclusion in New York on July 15th it was a voyage befitting the memory of founder Samuel Cunard. 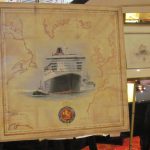 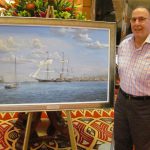