Cunard prepares to celebrate its 175th Anniversary in 2015 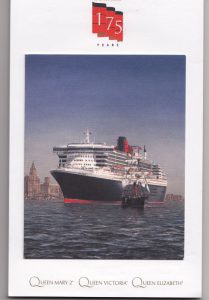 Planning for events to mark 175 years of Cunard history began in earnest with CSS Chairman undertaking to spearhead event planning Halifax, Nova Scotia, one of the five home ports along with Southampton, Liverpool, Boston and New York chosen as major venues for celebratory events in 2015.
Throughout the year many meetings were arranged with various ‘partners’ which in turn produced a vibrant, committed core group to plan and ultimately implement events on the Halifax waterfront to celebrate the 175th anniversary when QM2 was to be in port July 10, 2015.
The principal participants who worked together with Cunard Line on this initiative included the City of Halifax, Waterfront Development Corporation, Halifax Port Authority, Canadian Navy and Southwest Properties.