A Brief Step Back in Time – to the Age of Sail 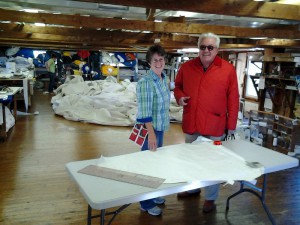 Bill Miller with Michele Stevens in the sail loft. Behind them employees are at work making a sail for the newly built replica of Columbia – an American schooner which competed against Bluenose in the International Fisherman’s Races in 1920’s

Canada’s goodwill sailing ambassador, the schooner Bluenose has been the subject of a major rebuilding effort and will be back sailing once again in 2013. A fall visit to Nova Scotia by ocean liner historian Bill Miller gave rise to a visit to the Stevens sail loft in Second Peninsula … and a tour of the just recently launched Bluenose as she lay alongside the wharf at Lunenburg Foundry.