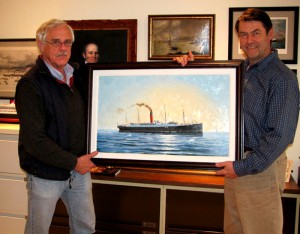 John Davis, President of Eco Nova Productions, producers of the History television and National Geographic television series ‘The Sea hunters’ provided the chairman with fascinating insights into the discovery in 2000 of the wreck site of the Cunard liner Carpathia, the Titanic rescue ship. Carpathia was sunk by the German submarine U- 55 off the southeastern coast of Ireland July 17, 1918 during WW1.