A Celebration of Cunard Heritage – 170th Anniversary of Cunard Line

What could be a more appropriate place to recognize and celebrate the 170th anniversary of the founding of Cunard Line than mid-Atlantic on the flagship, RMS Queen Mary 2. This then was the scene for a birthday/cocktail party hosted by John G. Langley, Q.C. Chairman of the Cunard Steamship Society on September 15, 2010 aboard QM2 during eastbound crossing M023 … continuing the regular transatlantic service begun by RMS Britannia, the first flagship on her maiden voyage back in 1840. One of the many highlights of the evening was a presentation by John G. Langley to Commodore Bernard Warner of a portrait of company founder Sir Samuel Cunard now on display in the Grand Lobby of QM2. 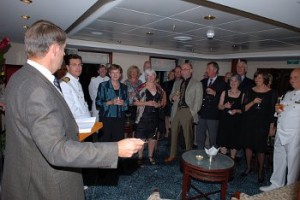 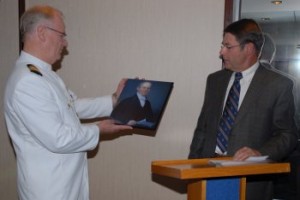 Above Left: John G. Langley addressing guests and Senior Officers who gathered in the Board Room aboard QM2 to celebrate the 170th anniversary of Cunard Line.
Above Right: Commodore Bernard Warner accepting a portrait of Sir Samuel Cunard from John G. Langley, Q.C. at cocktail party aboard QM2.