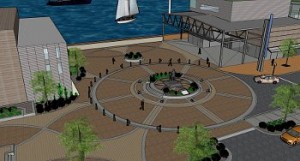 During the past few years the Halifax Port Authority has been very busy developing waterfront property in and around the Cruise Terminal…the transformation of the area has been dramatic…’Halifax Seaport’ is quickly becoming a reality and a significant part of this development has been the relocation of the statue of Samuel Cunard… albeit only a short distance, but to a much more prominent and spectacular location where he can be seen and enjoyed by all. 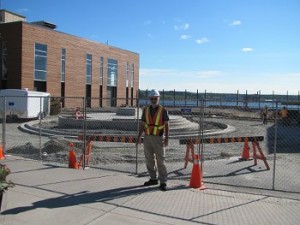 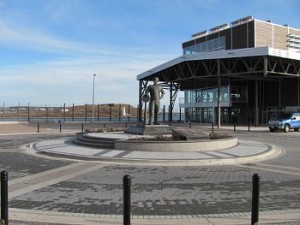 Above Left: New monument site in the making…Cary Vollick, project engineer photographed against backdrop of site for relocation of Cunard monument as work proceeded in summer of 2010.
Above Right: Sir Samuel Cunard as he appears late Fall of 2010 welcoming locals and visitors alike to ‘his’ Halifax waterfront.