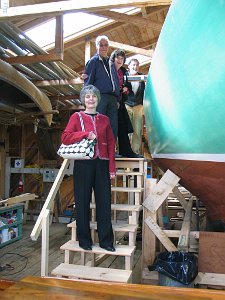 Boatyard at Maritime Museum of Atlantic... Eamonn Doorly, master boat builder at MMA in Halifax, in rear of photo proudly shows his latest restoration to Andrew and Helen (Campbell) McMaster of Glasgow, Scotland and Sydney, Australia where they now make their home... Judith Langley, hostess for a day in foreground. Halifax, October 2009

History will earmark 2009 as the year that Cunard’s Queen Victoria made her maiden call to the Port of Halifax. However, the cruise season also witnessed the flagship Queen Mary 2 in port on a number of occasions… still stopping traffic and turning heads, even though she has been a regular visitor to Halifax since her inaugural visit here in 2004.

It is always a pleasure to meet and greet passenger friends from visiting Cunard vessels…and to help them experience the inherent truth in a popular Maritimes tourism slogan … ‘Nova Scotia…so much to sea!’ And speaking of slogans… getting there is still very much half the fun! (Cunard Line advertising slogan).

In Nova Scotia we never say ‘good bye’, but rather ‘we’ll be seeing you’. And so it was with these Cunard visitors, all of whom made it back to their ship on time! 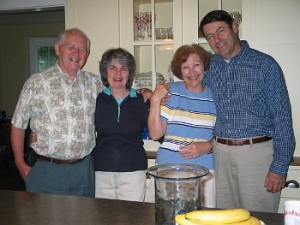 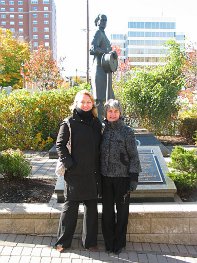 'With leave of the Captain' ... Christel Hansen, secretary to the Captain aboard Queen Mary 2 spends some time ashore , pictured here with Judith Langley in front of the statue of Samuel Cunard on the Halifax waterfront....what better place from which to begin a tour of Cunard's hometown!