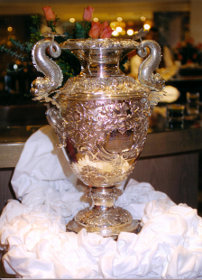 Britannia Cup: Were you aware that one of the world’s most famous pieces of silverware is displayed aboard the Cunard Line flagship Queen Mary 2?

Cunard Line was launched in 1840 when the company’s first mail steamer Britannia crossed the North Atlantic on her maiden voyage to Halifax and Boston. With the birth of Cunard Line and the advent of steam on the Atlantic, transportation and commerce was transformed between the Old and New Worlds. Boston soon became the western terminus for the Cunard steamships in North America.

The merchants of Boston were most appreciative of the enhancement of trade brought about to their city by Samuel Cunard … and his line of mail steamers of which Britannia was the first. To demonstrate their gratitude they commissioned a renowned Boston silversmith, Obadiah Rich to fashion a large urn or cup out of silver plate. At the time Rich was employed by the Boston firm of Lows, Ball & Company which continues to operate to this day under the firm name of Shreve, Crump & Low. 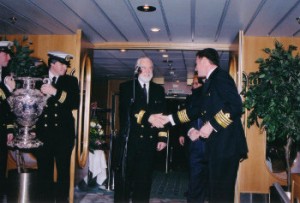 Official transfer of Britannia Cup from QE2 to QM2, 2004. Commodore Warwick, Master of QM2 accepting the cup from Captain McNaught, Master of QE2.

The piece was finished and delivered to Samuel Cunard via Britannia in 1842. The ‘Loving Cup’ as it was sometime called stood two and one half feet tall and was the epitome of the silversmith’s art. Not much is known about where it was kept post 1842. As the story goes, the cup, which originally had a top disappeared for many years until, amazingly, in 1967 a Deputy Chairman of Cunard Line in United States discovered it in an antique shop in Maryland. That same year it was brought back into service so to speak when it was presented aboard the Cunard liner Franconia on the occasion of her first post wartime visit to Boston. Subsequent to then, it was transferred to Queen Elizabeth 2 where it remained on display until transferred to the new flagship Queen Mary 2 in 2004.

The vase, also known by yet another name…the Boston Cup, represents the very essence of Cunard history and heritage. It has had a much travelled and remarkable history…some of which has yet to be told. If anyone knows more about the cup’s past, we hope that you will share it via this website. 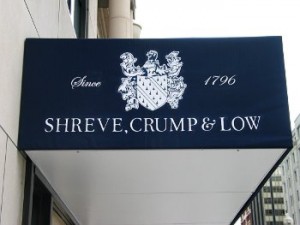 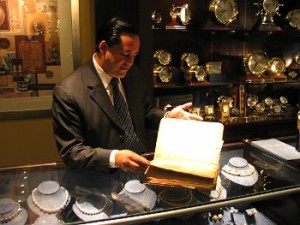