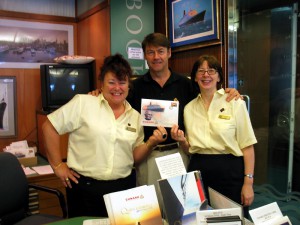 The Isle of Man Post Office, working in conjunction with Cunard Line and other Cunard enthusiasts has produced a number of spectacular stamps and commemorative covers to pay tribute to Queen Elizabeth 2 in her final year of service.
The Cunard Steamship Society was pleased to collaborate in the production of a Limited Edition Commemorative Cover ‘The QE2 bids farewell to Canada’ which was released aboard QE2 September 21, 2008, the very day that she made her final port call to Halifax, Nova Scotia, birthplace of company founder Samuel Cunard.

Copies of this cover, signed by the Chairman of the Cunard Steamship Society, along with a varied assortment of other limited edition items produced by the Isle of Man Post Office in conjunction with Cunard Line are available as part of a Queen Elizabeth 2 The Farewell Season Luxury Box Set . Orders may be made for a limited time online at: www.iomstamps.com or by emailing: stamps@iompost.com