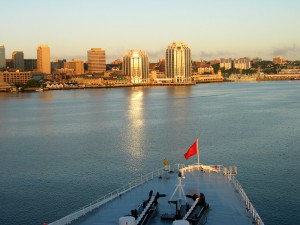 Dawn breaks as QE2 arrives in Halifax for the last time September 21, 2008

September 21, 2008 was yet another historic day in the life of this Canadian east coast seaport which is the birthplace of Samuel Cunard, founder of Cunard Line.
The longest serving Cunard liner QE2 tied up for the last time at Pier 22, promptly at 8:00 am. Soon thereafter many of the 1650 passengers, most of British descent disembarked the ship to explore the city from which Cunard Line was conceived back in 1840. 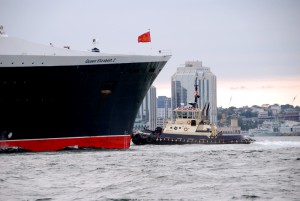 Meanwhile, civic, government and port officials had been invited aboard the ship for a reception and luncheon. During the reception Captain Ian McNaught, Master of QE2 presented John G. Langley, Q.C., Chairman of Cunard Steamship Society with the QE2’s paying off pennant for Halifax, Cunard’s Canadian homeport. The tradition of the paying off of a ship, the taking of a liner out of service, has long been a part of the Cunard tradition. The pennant embodies the history and heritage of both the ship and the company. This one has special significance to Halifax and will be shared and preserved on behalf of all Canadians by the Cunard Steamship Society.