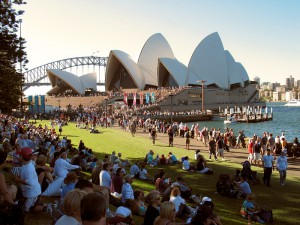 Some of the enormous crowd gathered on Sydney waterfront February 24, 2008 to take in the ‘Royal Rendezvous’  final meeting of QE2 and Queen Victoria

In February of 2008, while on her Maiden World Cruise, Cunard’s newest liner Queen Victoria made her inaugural port call to Sydney, Australia. Meanwhile, Cunard’s former flagship QE2 was on her 26th and last World Cruise and making her final port visit to Sydney. Both ships…the youngest and the eldest Cunard monarchs met for a memorable weekend in spectacular Sydney harbour.
The entire city, which has had a long association with Cunard Line, particularly during WW2 when Queen Mary and Queen Elizabeth were there as troopships, was in a mood to party, as only the Aussies can. 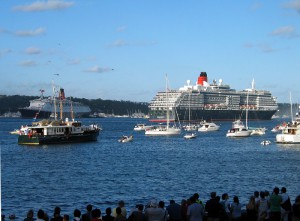 On a beautiful sunny day February 24th, 2008 the Sydney waterfront was the scene of tens of thousands people gathered to watch the much-anticipated ‘meeting of the Queens’. Shortly after 6:00 pm QE2 and Queen Victoria passed each other in mid harbour to the deep, resonating sound of horns from each ship, to the delight of all those watching from shore and aboard the large flotilla of pleasure craft which encircled the Queens. There were more than a few tears shed by rapt spectators both young and old. It was a special moment… another chapter in the rich heritage which is uniquely Cunard.