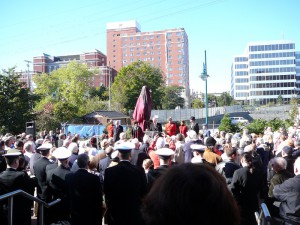 With the Queen Mary 2 providing a magnificent backdrop, a large crowd gathered on the Halifax waterfront on October 7, 2006 to witness the unveiling of a 10′ bronze statue of Halifax native and company founder, Sir Samuel Cunard. Just two years from its inception, the Samuel Cunard Memorial Committee( of the Halifax Foundation), with Commodore Ronald W. Warwick as its Honorary Chairman, brought to fruition the long held dream for the construction of a suitable memorial to Samuel Cunard. This Halifax native, the ‘Steam Lion’, revolutionized transportation and communication between the Old and New Worlds with the introduction of his steamships to the North Atlantic beginning with the Cunard Line flag ship Britannia, in 1840.

The statue was designed by Halifax sculptor Peter Bustin and cast by Artcast Foundry in Georgetown, Ontario. Nova Scotia Lieutenant-Governor Mayann Francis, aided by Samuel (8) and Benjamin (6) Paton, Cunard descendants, formally unveiled the statue with hundreds of spectators, including a large contingent of officers from the QM2 looking on. 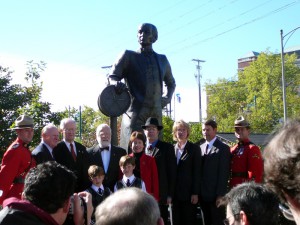 A sit down luncheon hosted by the Halifax Foundation followed in the nearby Cunard Centre.
Addresses during the luncheon were made by Jack Keith, Chairman of the Halifax Foundation, Carol Marlow, President & Managing Director of Cunard Line, John G. Langley, Q.C., Chairman of the Cunard Steamship Society and member of the Monument Committee, Commodore Ronald W. Warwick, and Pete Paton, great-great grandson of Samuel Cunard.