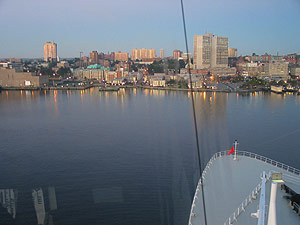 Queen Mary 2 approaching berth at Pier 21 in Halifax in the early morning light of October 3, 2005

The new Cunard flagship slipped quietly into Halifax harbour to berth at Pier 21 as
dawn broke on October 3, 2005. A cloudless blue sky and summer temperatures enhanced the special onboard events planned for this day… all focused upon and highlighting the unique historical links between Halifax and Cunard Line. 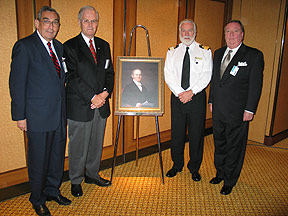 Another ‘Cunard first’ and history was made when the Sir Samuel Cunard Memorial Committee of the Halifax Foundation met aboard the QM2.

This committee which has been active for the previous year promoting the move to construct a monument to Samuel Cunard is chaired by Hon. Alan Abraham along with John Jay, Robert Stapells and John G. Langley. Commodore Ronald Warwick is Honourary Chairman.

A special luncheon held aboard in the Todd English restaurant followed. 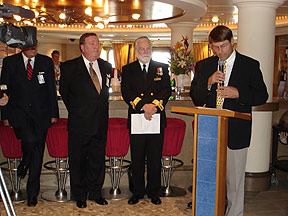 At this time the Halifax Foundation announced to a large contingent of invited media the formal plans to construct a lasting memorial to Samuel Cunard on the Halifax waterfront. Cunard Line presented Mr. Abraham with a ceremonial cheque for $75,000.00 making Cunard Line the lead donor in the campaign to raise funds for the statue which is hoped to be ready for unveiling in October of 2006. 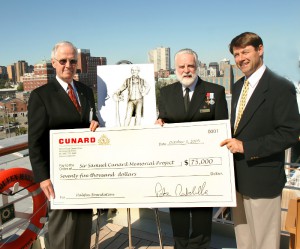 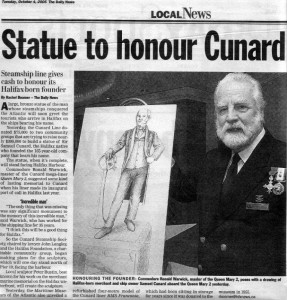