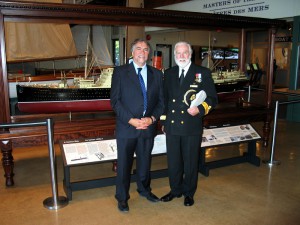 The Maritime Museum was the scene of two events of particular historical significance on the afternoon of October 3rd.
The Maritime Ship Modelers Guild and museum personnel have been working diligently together for the past eighteen months refurbishing a large thirteen foot builder’s model of the much loved Cunard liner ‘Franconia’. Commodore Warwick and the Cunard Steamship Society have been active in their support for this initiative which saw Cunard Line donate $10,000.00 towards the project during a ceremony at the museum associated with the inaugural visit to Halifax by the QM2 in September of 2004. 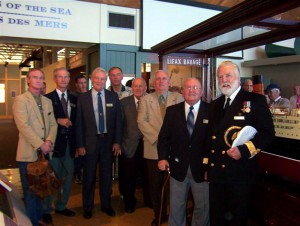 Today however was the day which everyone involved had looked forward to for so long…the formal unveiling of the completed model and case, a function appropriately conducted by members of the Modelers Guild and museum staff, aided by Commodore Warwick. The model and case, both impeccably restored will continue to be a source of pride and inspiration to museum visitors for years to come.
Following the unveiling of the Franconia, museum Director John Hennigar-Shuh took time to honour and praise Commodore Warwick, Master of the Queen Mary 2 as a great “friend of the museum.” In doing so, he announced that Commodore Warwick was the first recipient of the ‘Admiralty Circle Award’ presented by the museum to those who have made a special contribution towards the betterment of the museum and its mandate. 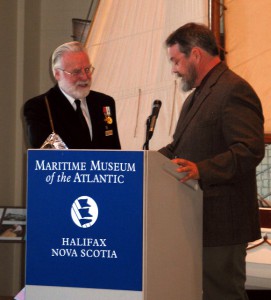 Presentation of Nova Scotia crystal to Commodore Warwick as first recipient of ‘Admiralty Circle Award’ from Maritime Museum of the Atlantic. 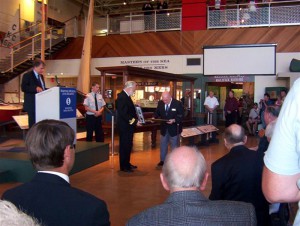