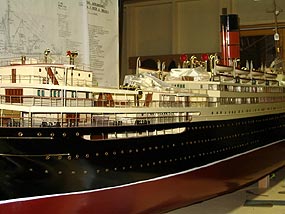 In July of 2003 the Maritime Museum of the Atlantic and members of the Maritime Ship Modelers Guild embarked on a cooperative effort to refurbish a thirteen foot model of this popular Cunard liner. While Museum personnel are currently restoring the large mahogany display case, the modelers are putting the finishing touches on the ship model – both should be complete in the next few months.
The ‘Franconia Project’ as it came to be known began in July of 2003 with the complete dismantling and cataloging of all parts of the ship. The modelers then identified the many different tasks which were then assigned to working groups from the modeler’s complement. A smaller ‘project group’ led the initiative which has continued unabated to this time. During this period the restoration has been witnessed by countless visitors to the museum who have enjoyed watching the modelers in the ‘workshop’ specially built to house the Franconia model while under refurbishment.

Museum staff and modelers alike took great pride in hosting Commodore Ronald W. Warwick and officers of the Queen Mary 2 on a tour of the ‘Franconia Project’ as part of the many events surrounding the inaugural visit of the new Cunard flagship to Halifax in September of 2004.