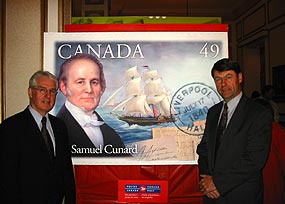 At a stamp launch ceremony held May 28, 2004 at the Lord Nelson Hotel in Halifax, Nova Scotia, Canada officials of Canada Post unveiled a stamp commemorating Halifax native Samuel Cunard, founder of the Cunard Line. A ‘special’ guest speaker at the opening was a long-time friend, journalist, statesman and ardent supporter of the concept of steam navigation, Joseph Howe, impersonated by actor Michael Bawtree. The Cunard Steamship Society as proponent was formally recognized for its role in procuring this stamp in ceremonies surrounding the inaugural visit by the new Cunard flagship Queen Mary 2 to Halifax in September of 2004.